Before I even start my High Fidelity talk with Matt, I know it’s one he’ll relish. If there’s anyone from my past who likes to rehash things and feel all the feels, it’s definitely Matt. As for me, well, our break-up is one I sort of don’t want to talk about. But this whole High Fidelity thing was my idea, so here we go. 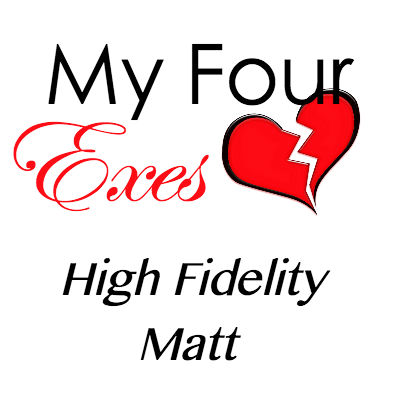 I scowl at him with my arms crossed until he can’t take it anymore.

“I’m supposed to talk to you about why we broke up. It’s a thing. Don’t ask.”

He just shrugs. He’s used to this sort of crap from me, I guess. “What about it?”

“Maybe start with why you cruelly dumped me over a damn seatbelt.”

He looks pained. “A seatbelt?”

“You don’t even remember, do you?”

He shifts his feet and won’t look at me. “Well… not exactly.”

“But it doesn’t matter what we were fighting about right before we broke up.”

“Fine. Right before I dumped you.” He makes a face like he just swallowed a toad. “It matters that we were fighting too much in general.”

I stick my tongue out at him, only sort of ironically.

“You have to admit, we argued a lot.”

“Oh, and that’s somehow MY fault?”

He sighs and pauses for a minute to let our last interaction sink in. “Do you see why it wouldn’t have worked?”

I grunt in an unladylike fashion and restrain myself from kicking him in the shin. We sit quietly for a while, me glaring, him looking at me with fake, condescending sympathy. Asshole. “You’re right. It wouldn’t have worked.”

He smiles, all simpering sweet. I might have to punch him. “Yeah, I think it was all for the best.”

“Yeah. Wouldn’t want you to be stuck with a fixer-upper or anything.”

“Guess you don’t remember that one either.”

His eyebrows come down. I’m pissing him off now. Good. “What is this all about anyway?”

“It’s supposed to be about closure, I guess. But I’m not going to get any because you only remember the shitty stuff I did. I will never hear an apology from you for anything.”

“I did!” I rage at him. “After we broke up I made a point of telling you that I was sorry I wasn’t more supportive of you while we were dating. That’s what you were always picking fights about, and I realized I could have been better about it and I told you that.”

“Oh. Yeah. I remember that. I thought that meant you’d gotten over it and we could be friends again, but then you kept ignoring me.”

“Hold a grudge much?”

I sigh and pinch the bridge of my nose and attempt to count to 10. I get to 5. “How ever much you think I was wrong and needed to apologize to you, there are things you did wrong, too. There are things you said that wounded me deeply. I loved you and I believed everything you ever told me, even when you told me I was horrible. And DON’T say you didn’t tell me I was horrible, because even if you didn’t mean to, that’s what I heard. I can’t be friends with you because that would mean being ok with that stuff you said, and I am not ok with it, even if I do forgive you.”

He scowls and squirms, unsure how to react. “So… goodbye I guess.”

“Yeah,” I agree. “Listen,” I sigh, and try to be a grown-up about this. “I might not want to be your friend, but I wish you the best. You know, health and happiness and all that bullshit.”

He pouts. “I don’t really believe you.”

He leaves, but he’ll probably go home and tell his wife in great detail about what a bitch I am and will commence to spitting after mentioning my name for the rest of his life. I don’t care because I never mention his name to anyone, ever. I am done with him and his manipulations and digs. I wasn’t lying when I wished him the best– I really don’t wish head-colds and penis rashes on him (much), but I do wish that the best for him will be far, far away from me.

One thought on “High Fidelity Matt”