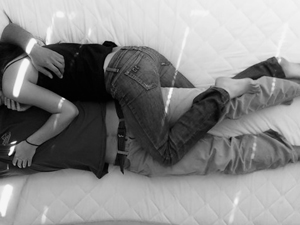 I don’t think I’m breathing. I’m awake, as far as I know, but this can’t be reality. I’m lying on the floor of my dorm next to a man I met for the first time hours ago. Well, less “next to,” and more “entwined with.”

But it can’t be real. It’s too fantastic– in the fantastical way.

The arch of my foot is just the right shape to run up and down his calf. The swell of his chest matches the curve of my arm draped across it. His shoulder cradles my head at the perfect angle.

I’m asleep. I’m dreaming. I must be. I don’t do this sort of thing. I don’t spend all night talking and cuddling on my first date with a man. I don’t. I’m not that kind of girl. Am I? I shiver.

“What’s wrong?” Matt mumbles, shifting me closer, which I hadn’t thought was possible.

Everything. This is all wrong. What am I doing? And why is it so perfect? How can it be wrong and perfect all at once?

He’s sleeping again– at least I think he is. I don’t know him well enough to know his sleep breathing. I don’t know him at all. I am the worst sort of stupid. I should get up. Or wake up, first, because I’m at least half asleep. Wake up, then get up, then make him leave. He’s spending the night. Or he has spent the night. What time is it? It must be close to sunrise.

But instead, his hand finds my hair and strokes it, and my nose nuzzles further into his neck. We sigh in unison– and is it really so bad to talk and cuddle all night until we fall  into a mutual half-sleep?

Have you ever gotten too close too soon after meeting someone? Did you regret it? What’s wrong and perfect in your life?

2 thoughts on “Wrong and Perfect”