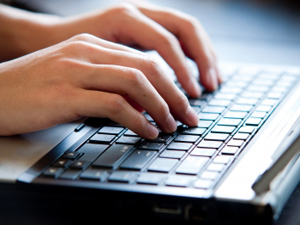 I sat down at the computer with the usual sense of anticipation. I knew there would be an email from Shane because there always was. Today, though, it was anticipation mixed with a pinch of fear.

I’d been thinking about dumping Shane. Well, such as “dumping” would be for a girl to do to a guy who had always been long distance. I wasn’t quite clear on the reasons, but things were starting to feel wrong– maybe because he was increasingly harder to explain to my sister and my friends and my parents. We told each other we loved each other, but would I ever admit I loved him to anyone else? Imagining that conversation with, say, my mom twisted my guts into a definite “NO.” And that just seemed wrong… and like a pretty good reason to dump him.

Shane’s email started off with the usual eloquent pleasantries, per his usual. But then he wrote something interesting:

I’ve been thinking a little bit about us, doll. It’s not that I don’t love you, so don’t take this the wrong way, but, well, things are kind of strange between us lately. Maybe even not “lately.” Maybe always. And I wonder from time to time if we’re doing the right thing by being together.

All the breath blew out of my lungs in a relieved sigh. He was going to do it for me. I wasn’t going to have to dump him. Praise all that is holy, as Shane would say.

I finished reading the email and immediately started tapping out a bright, sprightly response.

You know, I’m glad we talked and I am perfectly happy being friends. I’m actually even a little relieved. I think you’re right– things were getting weird.

In other news, blah blah blah…

And the email continued on mundane subjects in a jokey, light tone.

I did not expect his response to be anything other than the same way. But he wasn’t on board.

Hold on now. I said I’d been THINKING things were maybe a little strange and WONDERING if we were doing the right thing, not that I wanted to break up with you. And you’ve already moved on? I’m not ok with this, and if this is how things are going to be, I’m going to need some time to get over it. I can’t laugh with you and joke with you and be your friend. We just BROKE UP. I need time to adjust.

And he basically told me not to email him anymore.

In hindsight, duh. I was an idiot. But in the moment, it hurt like hell. I hadn’t been prepared to lose him wholly– I just wanted to lose the part of our relationship that was awkward and hard to explain to people. Couldn’t we still love each other and email each other and be each other’s Most Important Person, and also break up?

Again: In hindsight, duh. No, stupid. You can’t pick and choose all the neat, convenient things about a relationship and then expect anything less than heartbreak when you try to shirk the responsibility of the other stuff.

Of course, at the time, I mostly just felt confused and alone without understanding why. Guess that explains a great proportion of my teenage years, though…