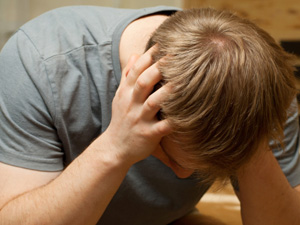 I suspect Luke recently got dumped again. I’m reading between the lines because it’s not like it’s all over Facebook or anything (and that’s the only communication I get from him nowadays), but I’m pretty sure.

He stopped posting gushy things about his wife, for one, and that was the biggest clue. He’s always been loudly in love, with whomever he happens to be in love with at the time.

This weekend he posted one of those silly millennial-written lists of 6 Ways You Can Make Women Love You or some horseshit like that, only this one was really bitter and had stuff on it like, “Be sure to pay attention to her every whim, but also give her space.” The basic idea was that women in general are insane bitches and it’s all their fault you keep getting dumped.

So the stages of a Luke-getting-dumped experience go something like this:

1. Cry a lot. (Him, not the dumper.)
2. Continually ask for a reason why.
3. If given a reason, dismiss it as bullshit because women are insane.
4. Wail about being a “nice guy” and how nice guys always finish last.
5. Post vague but bitter diatribes on Facebook.

I actually debated calling or emailing to check on him. Just a, “Hey, noticed you seem down. Everything ok?” But that would open the door for the I’ve-been-dumped-AGAIN story in which I always feel like the origin– the first and worst dumper in all the land. And he’d ask me again why I dumped him and I’d evade the question again because it’s not helpful to tell someone who’s freshly dumped why you dumped them 15 years ago. So I don’t call or email.

I just read between the lines and wonder, and hope he’s done with the crying part at least, and try not to get mad about the bitter part, because it means he’s on his way to recovering.