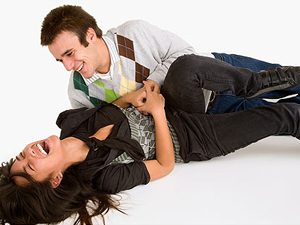 Shane and I only ever met twice in person– once while we were “dating,” and once after we’d broken up.

It was the height of summer when we met in person for the first time. He came to my house and hung out with me for the day, then spent the night on the pull-out couch. We were 15 and I was head-over-heels for him, but he was only my second boyfriend ever, and the first long-distance one, so I really had no idea what we were doing.

And, truthfully, we weren’t doing much of anything at all. We sort of chatted awkwardly over email about how boyfriend/girlfriend we were going to be in person. Online we were super close and shared everything. And, there is no flattering way to explain this, so I will just say it– we’d done some cyber making-out. (Not sex. We were too well-behaved for even cyber-sex.) But we didn’t quite know how to handle the in-person stuff. You don’t just start making out with someone you’ve never even met before, right?

So, we stayed pretty far apart, physically. There exists a picture of him with his arm around me. And there was one kiss on the cheek (from him, not me, because he was braver than I was).

But… there was a tickle fight.

I don’t know how we ended up on the floor in my room, but I do remember the door was open. (The continuing theme here is that we were well-behaved teenagers, I guess.) Somehow someone poked the other person. I can’t remember who poked who, but it was probably me. I was forever translating my desire to cuddle or make out with someone into pokes or slaps or insults. Very mature, I know.

In any case, it escalated. Quickly. We were in a full-on, wrestling on the floor, screaming, laughing, laugh-crying, kicking, biting tickle fight in no time flat. In retrospect it is a miracle that: (1) no one got hurt; (2) neither of my parents came running down the hall to see why a strange boy from the internet was murdering their daughter; (3) we did not end up making out at least a little.

I guess we were both craving the touch so much that we couldn’t help ourselves, and yet teenage propriety and crippling shyness are enough to stop a flood. And, at least for me, it was a flood. Maybe when you’re 15, the flushed, out-of-breath, horrible tension of denying yourself what you want is such a standard part of your life that you get really good at telling it to shut the hell up.

But damn, it was a good tickle fight. I was sore for days, no lie. Wink wink, nudge nudge.

What’s the sexiest non-sex you’ve ever had? Do you like to be tickled? How did you show your affection when you were a teenager?