I am dreading my High Fidelity conversation with Luke, mostly because it was a one-sided break-up, and the side doing the breaking up was mine. 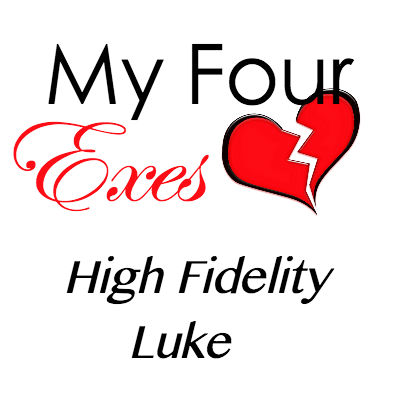 I sigh and shift uncomfortably. “I wanted to talk to you about why we broke up… I guess.” I breathe through nerves and nausea. “So, um. What do you think?”

He stares for a minute, then gets flustered too, because he can see I am. “Uh, er. Well, I don’t know. I guess it just wasn’t working.”

“Oh hell,” I grumble. “Just say it. It was my fault. It was all me. I dumped you and broke your heart. I am a horrible human being. There. I said it so you don’t have to.”

He’s quiet for a minute, then says softly, “I wouldn’t have said that.”

“Gah. I know you wouldn’t because you’re nice and I’m mean. We have established that already.”

“Hey.” He tentatively touches me on the shoulder, and then pulls back. “You’re not horrible. You’re not mean. You broke up with me, but that doesn’t make you either of those things.”

I give a wobbly smile, though I’m dangerously close to tears.

He makes a noise half-way between a shriek and a laugh. “Do not cry. I mean it,” he says. “Listen, why do you even want to talk about this? We were so young, and we’re both happy now. We obviously turned out ok.”

I turn around for a second to compose myself, then back to him. “You’re right. Of course you’re right. You have your wife and the boys and you’re happy now.”

“Oh sorry, I forgot you like to swear… um… Fuck yeah.”

He sighs and hugs me. “We really don’t have to talk about this.”

“I want to,” I say, lying through my teeth and into his shirt.

“Ok then.” He pushes me back so he can get some eye contact. He never does that. Shit. “Why?”

My stomach drops. It’s the question I could never answer for him, and the one he kept asking, over and over. My ears ring and the room tilts. There’s not a good reason. There never was. I tell him, “I don’t know,” on a hoarse whisper.

His eyebrows knit. “You don’t know?”

I swallow hard and will myself to fucking DO THIS. It was my idea, after all. “I was unhappy with everything. With my whole life. School, living away from home, not being smart or likable, having no friends. It really was the worst time in my life, and I just needed to change things.”

“You were unhappy with me?” he asks. He’s not looking at me anymore.

“No!… I mean, well… Yeah, kind of, I guess. I just felt… stagnant. Like maybe the reason I was so unhappy was that I couldn’t grow up or something. And you were part of that. You made me feel young, and naive, and like I’d never get past the horrible in-between-ness of teenager and adult.”

“You know what I think? I think maybe you were just growing up a little too fast for me.”

“You never grew up,” I tease with a grin.

“Well. True,” he admits, and pushes his Gothy dyed-black floppy hair out of his eyes. “But maybe you wanted to and I didn’t, and I was holding you back.”

We sit in companionable silence for a few minutes. It wasn’t as bad as I thought it would be. The only tears so far have been mine, and that’s a switch from when I broke up with him. I decide to tell him everything. “I wish you had been my first,” I say.

He chokes on his own saliva. I thump him on the back. “Like first time? For, you know, sex?” he manages.

“Yeah,” I laugh. “The thing I regret most about us, I think, is that we didn’t sleep together. Is that horrible of me?”

He considers for a moment. “Weird. Not horrible.”

“So… you broke up with me because you were really sad and life sucked, and you wish you’d slept with me when you had the chance… Did I get that right?”

“Fine,” I say with mock annoyance. “But don’t you bring it up ever again. I just thought you should know.”

“I will take it to my grave,” he promises. “Thanks for telling me, sweetheart.”

And we never talk about it again, but I’m glad he knows. It’s something I never wanted to take to my grave.