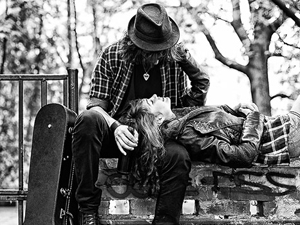 Oh pet names, you subject of much consternation. Sometimes we love them, sometimes we hate them, but somehow it seems we always manage to have them. Ok, well, maybe not always…

I don’t think Joe and I had pet names. Well, unless my brothers’ teasing moniker for Joe counts. They called him Joeypoo– frequently and loudly and usually interspersed with suck-face sound effects and neener neeners.

Shane and I actually discussed pet names at length, because we discussed everything at length. We decided in favor of them, but only if we never used the ones we chose for each other for anyone else. Thus I became “doll” and he became “pookie.” Understandably, I have kept my end of the bargain, partly because of our agreement and partly because no one else would ever let me call them “pookie.”

I attempted to contrive nicknames between Luke and me. I started calling him “puppy,” thinking it would be cute if he called me “kitten.” Unfortunately, my pet name became some sort of wacky combination of “kitty,” “mrowr,” and “iddlewiddlekissypoody.” Not what I had in mind.

Matt called me “honeyrabbit.” I actually never could figure out what to call Matt between his many military nicknames, his real name, and his real semi-preferred name. To date I have settled on “asshole,” but I didn’t call him that (much) when we were dating.

Do you and your significant other have pet names for each other? Did anyone ever give you a pet name you hated? What’s your stance on pet names in general?

One thought on “The Pet Names”