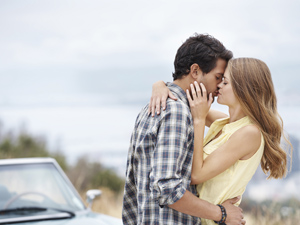 Joe and I did not have the kissing thing quite down. Most of the time, I got bored with it quick and sort of just hung around not to hurt his feelings, and then scampered off gleefully when it was over. He was my first boyfriend, my first kiss, and I was only fourteen, and I just assumed this was the way it was supposed to go.

After a date one day, Joe pulled his car up to the yard in front of my house. (We didn’t have a curb– just lawn and a ditch.) He strategically parked juuuuust out of view of the house, where a few trees blocked the front windows. We got out and as I headed toward the door, Joe grabbed my hand and pulled me back for a kiss. He had arranged himself so that he was leaned up against the front bumper of his car (still out of view of the house) and I was leaned up against him. There wasn’t much of a height difference between us, so we were pretty much hip-to-hip and lip-to-lip.

I resigned myself to the usual tongue-plundering and slobber games. If this sounds at all romantic or sexy, I assure you it was not. Predictably, after a few minutes, I was bored and a little grossed out.

I got it in my head, somehow, that I was going to fix this. I was going to do it my way and see what happened. So I broke away from the kiss, took a step back, wiped the drool (yeah), and gave him a look. A sexy one, I thought.

“What are you doing?” he asked.

I didn’t answer him. I just stepped forward again, closed my eyes, and then I kissed him. I kissed him the way I thought kissing should be– a little soft at first, with just my lips, and then I snaked my arms around his neck and opened my mouth, just a little. And when I was done with that, I pushed my whole body against him and kissed him. Really kissed him. My heart sped up, and something felt more awake and sort of tingly inside me, like the way I’d expected kissing to feel from the start, even though it never had until then.

Something shifted in Joe, too. I felt the response all over his body. His joints softened a little, his mouth got hot and desperate, his fingers flexed on my hips. I think he might have made a tiny sound in his throat.

And then I felt it.

I had theoretical knowledge of erections. I’d seen the pictures in the sex ed books. I’d heard the lewd stories my classmates told at the back of the bus. But this was new. It had formed against my belly and… and moved. I was intrigued, and a little enchanted. I moved just the tiniest bit against him to see what would happen.

He let out a moan or a sigh or something and pushed me back a step. His breathing was hard like mine, but had I imagined… it? Or had I done something wrong? Why had he pushed me away?

I was confused. He was aroused, although I didn’t realize it at the time.

He kissed me one more time, but kept everything but his face as far away from me as he could manage. And then he got in his car and drove away.

But I’m pretty sure, looking back, that that’s exactly what happened.

One thought on “You Move Me”