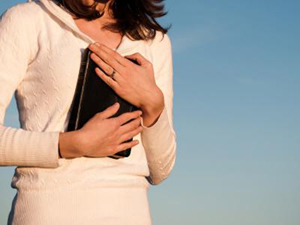 Matt often blamed himself for being my corrupter. It’s true that before he and I met, I was clinging to the last threads of my growing-up religious philosophies. And it’s true that sometime in the course of our relationship, I loosened my grip and began floating in the weird world of agnosticism. But it’s not true that he corrupted me. That was completely my own doing.

When I was a pre-teen and teenager, my mom taught me that ladies wear pantyhose with dresses. That’s just how it was done, and I accepted it as Truth. So every Sunday and special occasion, if it required a dress, it also required pantyhose and I dutifully struggled into them, planned my shoes around them, sweated through them, ripped them, patched them with clear nail polish, and did all the myriad things you have to do to make pantyhose work. Because you’re supposed to, that’s why.

Then around college I discovered that not everyone wore pantyhose with dresses. In fact, some people never did. And guess what? They didn’t look bad. There were no repercussions from on high. And those pantyhoe-less women sure looked a hell of a lot more comfortable than I felt. So I ditched my pantyhose, too. Sometimes a thing you thought was a requirement all of your growing-up years actually turns out to be a thing that never fit quite right and you’re better off without.

I’m not trying to reduce religion to foundation undergarments, but you can see the parallels I’m trying to draw. Religion for me growing up was just an accepted thing. I did it for no other reason than “because,” and while I thought deeply about it from time to time, getting rid of it altogether was never even an option. Until college.

All of the “have tos” of my religion (praying, studying the Bible, witnessing to others) became very, very difficult in college. At first I thought that of course God was just testing me, and to pass this test, I had to buckle down and try harder. But at some point you run out of trying, and freshman year was that for me in so many areas of my life. I ran out of the will and the energy to do any of the religion things. (Or, really, any of the non-breathing-and-sometimes-eating things, including schoolwork.)

From time to time I would try to go back. I was on-and-off at the near-campus mega-church. I half-heartedly joined my dorm’s Bible study group. (That ended abruptly one night when a girl asked for prayers for protection while traveling in a foreign country. I, in my ignorance, I guess, thought I would try to make her feel better by telling her about a friend of mine who had recently gone to the same place and had been totally fine, so really, she shouldn’t worry. I swear I was just trying to help. But she got a sour look on her face and said, “Well, fine then, I guess I don’t  need any prayer, according to you,” and scowled at me for the rest of the night. So no more Bible study for me.)

And you know what? Slowly, as the guilt over not wearing my religion faded to tolerable levels, I realized I hadn’t really hurt anyone by not praying or reading Leviticus or trying to convince people that God-Jesus’s magical blood can bleach your innards. Also, God hadn’t smote me or anything. I hadn’t regressed into a Smeagol-like sin-being, intent on doing harm to everyone around me because my black heart was consumed by the devil. So maybe… maybe I didn’t actually need religion (or pantyhose) in order to be a good person.

Matt gets no credit for any of that.