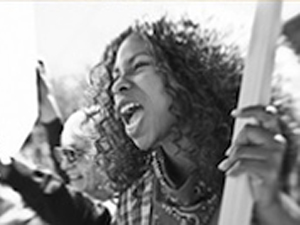 Mostly, I’ve been observing #YesAllWomen and staying out of the middle. It’s not because I don’t agree with the message. I do. If I were a man, I doubt I would have felt like my life was in danger on dates, ever. The “nice guy” phenomenon has touched me, too.

But on the whole, my life has been good, and so have the men in my life.

Still, even good men grow up with a male privilege they don’t even recognize. I have gotten in arguments over not wanting to make out (or whatever) when certain exes felt entitled to make-outs (or whatever). I’ve been told I was a “tease” for what I was wearing, or for being friendly without intending something more.

I’ve been told to smile by strangers in public (always men). I’ve been cat-called and made to feel unsafe alone.

So, I guess what I’m saying is #YesAllWomen have experienced this stuff, even the ones like me who have been lucky enough to have lives full of stand-up guys. Count me in– I’m All Women, too.