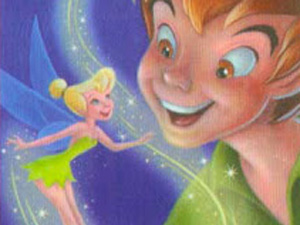 For me, it’s always been about the romance.

I imagine some people aren’t wholly consumed from birth with the idea that they will find a soul mate and live happily ever after, but I am not those people.

I can’t blame this on anything but the way my brain is wired. Even the stories I read or watched when I was young that were not romances became romances to me, because I would re-write them in my head. I coupled every character with their match. If I didn’t like the way it was, I made it better in my imagination.

In my imagination, the Disney version of Peter Pan was much better, for example. Peter was way less of an ass to Wendy, for one thing. He did not fly too fast for her to keep up, or let her fall in the mermaid pool, or flirt with Tiger Lily or Tinkerbell. He was dazzled by Wendy’s obvious intelligence and, of course, completely devoted to her. In the musical version of Peter Pan (which I also watched over and over), the Mary Martin Peter Pan of my imagination stayed with Wendy and was willing to grow old with her– he didn’t fly back to Neverland and leave her in London. I edited out all that creepiness of Peter Pan wanting Wendy to be his mother, too. Yeck.

So I can’t really blame culture or upbringing for the fact that finding my someone was always my mission. To my adult ears, it sounds a little sad and trite to say it, even though it’s the truth. The worst thing I could imagine was being an adult and alone– mateless and therefore loveless, useless like a left shoe without a right shoe. See? Sad and trite.

It took me well into my adulthood (and my marriage) to realize that I am a fully capable and functioning human being even apart from a life partner. This aptly explains the fact that singledom was a brief and temporary state for me pretty much from the age of fourteen on.

I was beating myself up about something similar at a therapist’s office once, and promising to be a better woman and never saddle any one person with the responsibility of making me whole, ever again, and she stopped me. “I think you should give yourself some credit for having such a capacity for love,” she pointed out. (And then I probably burst into tears because I like spending wads of cash to sit in a windowless office and cry in front of a stranger.)

I’d like to think I’m mature now, and beyond feeling like I’m incomplete on my own. I’d like to think that in my adulthood, I’m not just putting on a show with a lot of bravado about being independent and sure of myself. I still love the romance, though, and maybe the steps go: 1) be completely dependent on romance; 2) reject romance entirely and become a “strong, independent woman;” 3) realize you can be strong and independent and still want romance… still be deserving of romance, love, partnership, all those things I’ve longed for all my life.

I think that therapist was probably right. The capacity for love and the desire for romance isn’t, in itself, a bad thing. It’s just that Wendy might need a chance to fly on her own a little bit, to swim with the mermaids because she wants to, and to decide for herself whether or not she wants Neverland or London, or even Peter Pan.

P.S. In my new revised imaginary version, Peter Pan admires and respects Wendy’s individuality and although she remains in London and he goes back to Neverland, he never forgets her and she holds her love for him in her heart forever. Guess J.M. Barrie was smarter than I gave him credit for after all.