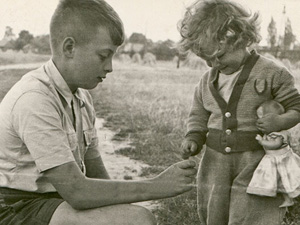 When I was about 11, I was absolutely convinced that I should have had an older brother. I needed one. He would protect me from all the evils of the world and I would not be the oldest (and, to my mind, most neglected) child in the family anymore. Of course I knew it was impossible, but I wished really hard for an older brother. Prayed for one even.

My mom and dad decided (not long after I started my campaign of wishes and prayers) that me and my three siblings were old enough to know about my dad’s first marriage. They had divorced and my dad had moved away. And there was a boy– my dad’s son… my older brother.

Of course, the lesson I probably should have learned from this is to be careful what you wish for. My older brother in my adulthood is a man who looks very much like my dad, and who seems nice enough, but is not anything like a brother. We didn’t grow up together, after all. You can’t wish that into existence.

The lesson I learned instead was that if you wish hard enough for something, even something impossible, sometimes it has a way of coming true.

I think I may have wished Joe into existence. It’s possible that the force of my imagination made him materialize out of thin air. Because he was everything. And of course, I’d planned to just admire him from afar because my short life until that point had shown me that boys didn’t know I existed, and “from afar” was the only way I could admire them. And then he asked me out– I think maybe because I wished so hard for it.

When Joe and I broke up, I started to think about what more I wished for in a boyfriend… One who was, you know, a little smarter would be nice. Joe was doing fine in the looks department, but, uh, well… He wasn’t exactly a philosopher or a poet. Shane was handsome, a poet and a philosopher, and came with the added convenience of my not actually having to make out with him since he was long-distance. (The making-out thing was a point against Joe, too. Again, he was a beautiful man. Not a great kisser.) Boyfriend wish number two fulfilled.

Shane and I broke up because I couldn’t handle the weirdness of an Internet boyfriend. I wished for a boyfriend who was, you know, there. Luke was everything that was the opposite of an Internet boyfriend. He was real life. When he was in a room, you knew it immediately. He was presence and vibrancy and noise. There was no pretending that Luke did not exist. He existed loudly and with much flailing. Check off wish number three.

By the time I broke up with Luke, I was a broken person, and all I really wished for was someone who would stand up to me and tell me what they really thought of me. Luke thought I was the moon and stars. I thought I was the dirt under everyone’s feet, so obviously that wasn’t working for me. Enter Matt.

I’m not saying I wished for an abusive asshole– not consciously. And, to be fair, Matt and I had moments of goodness between us. But the relationship was a destructive one, especially, I think, to me. I reeled from it for years. I made decision after horrible decision based on the fact that he treated me the way I felt I deserved to be treated– like a stupid, petulant child at best, and a selfish, horrible harpy at worst. In hindsight I don’t think I was either of those things, at least not any more than any other 19-year-old, but my life had become a whirlwind of self-esteem sucking debris and Matt was just another piece of it. He fit in, and I let him stay.

So, if wishes were exes, I’d have four.

In my adult life, you’ll still catch me wishing on the occasional star or birthday candle. But now I try to stick to wishing for things like ice cream and world peace. Trust me: It’s easier that way.