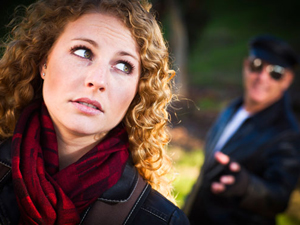 At least two of my four exes could have murdered me in the wilderness.

If you’ve never had an intense enough moment in your relationship where you wondered how well you really knew the guy you were dating, and whether or not they were really capable of driving you out to the middle of nowhere and murdering you for whatever fault you’d recently committed, well, you are not me.

Most of this I’ll blame on my overactive imagination, and I will claim that I never really believed they were capable of such heinousness…

When I broke up with Luke, he pretty much went berserk. He wept. A lot. Openly. And then he would go home and weep, and call me and weep on the phone, and ask me if we could go somewhere to talk, and sometimes I would feel guilty enough to say yes.

On one of these occasions, Luke picked me up in his truck and we drove out to one of our hiking spots. He was eerily silent the entire way there, and did not speak to me at all as he slid out of the truck and pulled out a backpack. What in the hell did he need a backpack for? Were we going to be gone that long?

I wanted to ask him, but he was already halfway across the parking lot to the trailhead. I briefly considered leaving, but I had no ride back to civilization. Weighing my options, following Luke into the woods whilst he was carrying a backpack with unidentified cargo seemed less of a risk than hitch-hiking back to my house. So I sighed and ran to catch up with him.

He remained silent as we walked, and I grew ever more leery of the mysterious backpack. He could have a gun in there, after all. Maybe a tarp that he planned to wrap my corpse in before he tossed it in the river. Possibly a cinder block or two to weigh the carcass down to the bottom of the water. Probably some Wet Ones in case any of my blood spattered on him.

Abruptly, he sat on a rock and took off the backpack. He set it down next to him. I carefully took a seat beside him, keeping the backpack in my line of sight. If I had to run, I thought, I’d try fording the river here and running up the opposite bank. I was pretty sure I’d reach the road eventually, and I could flag down a motorist to save me from my grief-crazed murderous ex-boyfriend.

He was talking and asking questions, but I was barely listening to anything but the tone of his voice, growing more and more agitated, breaking, rising in pitch and volume. He reached for the backpack. I sucked in my breath. This is it, I told myself. Run!

And I was halfway off of the rock where I was sitting, ready to make a break for it, when he pulled out a full-sized box of Kleenex and began weeping in earnest. Oh. The backpack was so he could carry a box of Kleenex. A whole box. And he used most of it, too, poor guy. I patted him on the back and murmured platitudes for an hour or so, and was immensely, immensely relieved for once that all I had to deal with were his tears.

Fast forward to Matt. Matt yelled a lot, but he’d usually fume for a good long while before he could get up to the yelling part, and I’d known him long enough by then that I could recognize the signs of a really steamy fume.

We were driving in his Jeep and he was working up a big, big head of steam. I’d said something, or done something, or possibly failed to do or say something that was really pissing him off. I had no idea what, but I knew the fight was coming. I rolled my eyes, crossed my arms, and hunched down in the passenger seat, waiting for it. At least we were in the car, so I wouldn’t have to deal with the embarrassment of a public argument.

But he kept driving, past where I recognized the landmarks, way out into the country. As dusk turned into dark, and Matt’s fume showed no signs of detonating or diffusing, I began to worry. Maybe this would be the one that would make him mad enough to do physical violence. To me. Ulp.

What could I do? He was driving, and I hadn’t told anyone where I was going. Relatively few people even knew I was dating him, or could have given his name as a suspect. This was before the days of cell phones, so I couldn’t discreetly text anyone to tell them to come looking for me if they didn’t hear from me. No way to call 911 if things went bad.

I resolved that if he was going to murder me, at least he wouldn’t get away with it. I slid my hand up to the plastic window of the Jeep’s pop-in door and left a distinct set of fingerprints. I pulled a thread out of my sweater and stuck it to the side of the passenger seat.

I was reaching for my purse and devising a way to hide my drivers’ license in the Jeep somewhere where he wouldn’t find it, but the police would, when he sighed, turned to me, and said, “You know what? I don’t even care. Let’s go get some supper.”

And he turned the Jeep around, drove straight back into town, bought me dinner, and was pleasant as could be for the rest of the evening.

Have you ever been afraid of your significant other? Did you ever jump to a conclusion that turned out to be ridiculous? Do you remember dating before cell phones?

One thought on “How I Could Have Died”