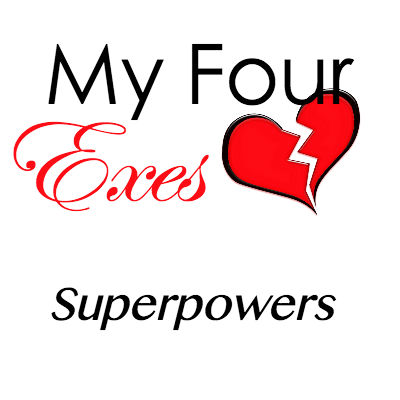 Joe’s superpower was making me forget about all of his less attractive traits and habits (wrestling, smoking, writing terrible poetry) by flashing that big blinding grin at me. It was like the Men in Black pen blinky light thingie that melts your brain a little bit every time you look at it.

I think Shane’s might have been negging, before negging was even a thing. He told me, after he met me in person for the first time, all about how I was lovely, of course, but my sister’s hair was just a little shinier than mine, and her voice was just a little sweeter. Not that I don’t agree, but I probably shouldn’t have had to hear it from my boyfriend. But it didn’t make me hate him– it made me want to try harder to impress him, and also made me love him a little more because he said nice things about my sister, even if they were  sort of at my expense. I’m not sure if that’s my psychological damage coming out to play or his– maybe a bit of both.

Luke’s superpower was niceness, which sounds like the lamest superpower ever, but I mean this guy was nice. Like, he was even nice to me in my teenage years, when my greatest aspiration was to be a badass with a bad attitude. Nice was not high on my list of Things To Be, but Luke never, ever, ever, not even once snarked back at me when I prodded him with my meanness.

Matt doesn’t get a cape. He gets a red t-shirt with “ASSHOLE” printed across it real big. Maybe that’s not quite fair. It’s possible that his superpower was butting in to other people’s lives, telling them how to live, and then bargaining, bribing, and cajoling (with God, if necessary) to get what he wanted.

It’s possible that my superpower is long-lived bitterness. Oops.